The Problem That Has Always Been Around 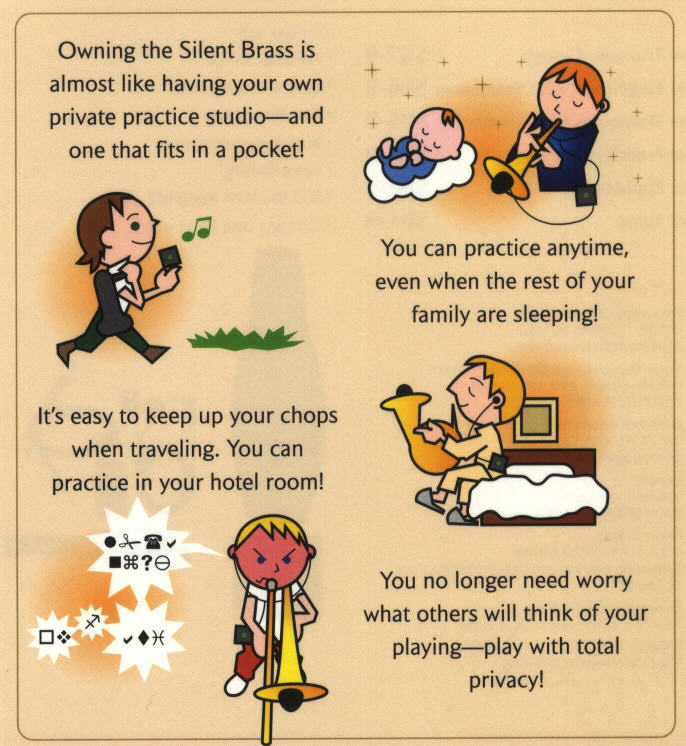 You’ve chosen to play the trumpet or cornet, the loudest of all brass instruments. Due to its loud sound, playing this instrument in a private setting, such as your home, can be difficult. Like any instrument, the only way to get better is to practice.  You shouldn’t practice if it isn't fun. It should be fun.  When practicing, it's often difficult because the sound you make is so, well, you know, loud.   Yet, living in an apartment, condo, townhouse, dorm, or barracks makes it more difficult to practice without disturbing your neighbors.

Because you can still have neighbors who can hear you practicing in a home, the issue is not limited to close-knit communities. But besides that, practicing in the home is often not easy because you have roommates, children, or a spouse that you have to please. They all have to deal with your practice. Yes, they are all supportive of you as they walk around the house with earmuffs and headphones on.

So, what tends to happen is, as a student, you do not bring your instrument home to practice. You leave it at school, and the only playing time you have is during band class. As a college student, you often end up doing the same thing, so you do not bother those around you. As a professional, you practice only when everyone is out of the house. You end up compensating in some way to play the instrument you love.

Take the time to practice.

To get good practice in, it takes time to warm up the lips. Then, when you are practicing a piece of music, you spend most of your attention on the challenging sections the ones that you repeat over and over again, you know exactly what I mean. This is when you do not want to be distracted by thinking about who you may be annoying nearby.

The Solution to the Problem

With Yamaha's Silent Brass™ system, you can put all these concerns aside. The Silent Brass™ Series is a sound-muting system that muffles the sound of brass instruments while allowing the player to hear a natural-sounding performance. The SB7X-2 Silent Brass™ System for Trumpets and Cornets will allow you to practice anytime and anywhere. Your practice SB7X-2 Silent Brass™ the evening when family and neighbors are settling down for a good night’s rest. 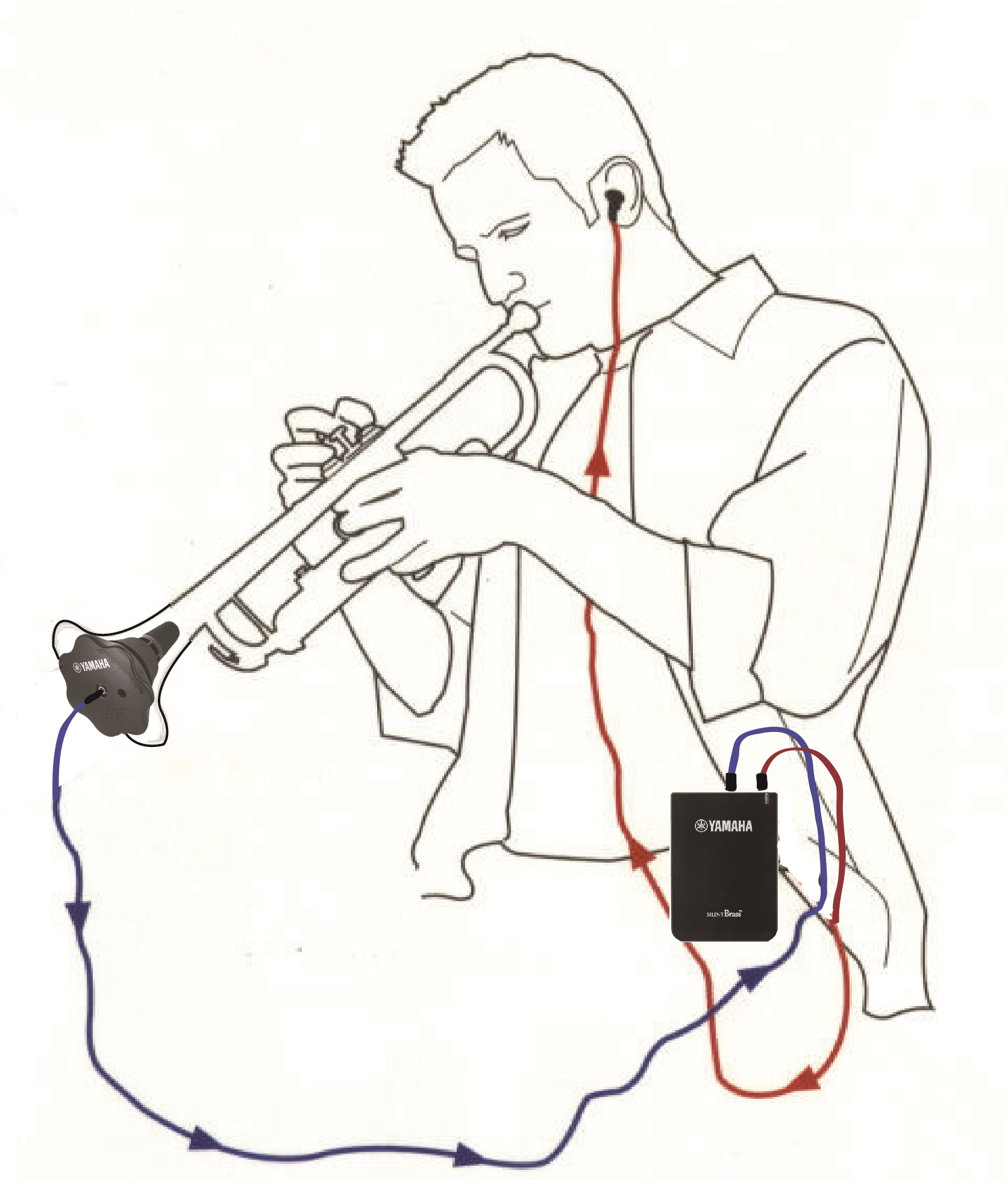 How does Silent Brass work?

This illustration is of a Silent Brass™ for trumpet (SB7X-2). The mute (PM7X) goes into the bell of the instrument. This mute has a built-in microphone that captures all your sound. An audio cable comes out of the mute that plugs into a miniature amplifier (STX-2 Personal Studio™ Module). Out from the amplifier are headphones that allow you to hear yourself as if the mute was never in the bell!

Another nice feature of the STX-2 Personal Studio Module is that you can input accompaniment music for an MP3, phone, or CD player, and play along with it.

How it all got started—a little history on Silent Brass 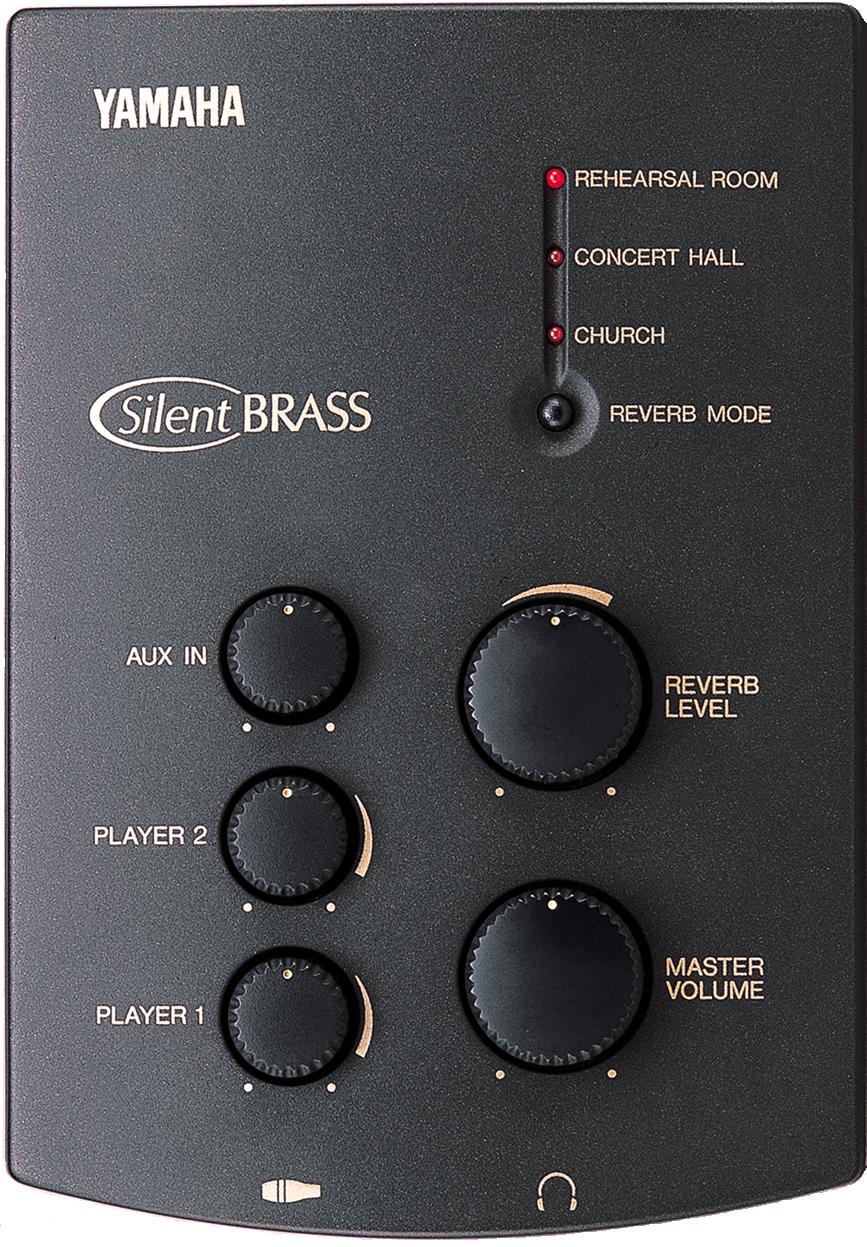 Yamaha came out with the first design of the Silent Brass™ system in 1995. This first system started out with an ST7 module that would allow two players to use the system at the same time. Yamaha had in mind an instructor or tutor working together with a student in any environment to practice and teach a brass instrument.


Each brass instrument has its own practice mute, such as the PM9 for piccolo trumpet, the PM7 for trumpet and cornet, the PM6 for flugelhorn, the PM5 for trombone, the PM3 for french horn, the PM2 for euphonium or baritone, and the PM1 for tuba.

Because each component can be purchased separately, a player who plays many instruments does not need to purchase a new complete system to silence their practice—just a new mute.

Yamaha completed a full system for each instrument when it combined the ST7 with one of the mutes, so the MPN (Manufacturer Part Number) was assigned to each system. The SB7 Silent Brass™ system for trumpets and cornets included a ST7 module, a PM7 trumpet mute, a pair of Yamaha earbuds, and a single cable connecting the mute to the module.

They did this for each instrument except the PM9 piccolo mute, which they left as an accessory-only mute. 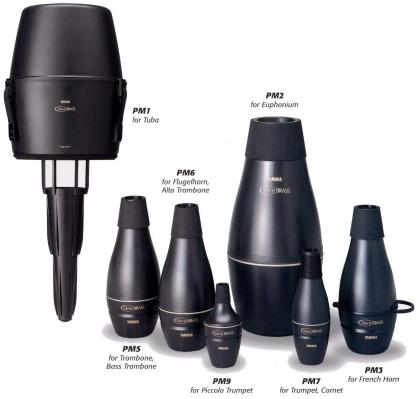 In 2002, Yamaha came out with the 2nd generation of the Silent Brass™ system. They left all the mutes the same size and style, but they did change the rubber end of the mute to foam, which keeps the mute in the instrument much better. The main difference was; in the size of the module, which was renamed the ST9 personal module; some echo features were removed, as was the dual player function that came with the ST7 unit. This changed the price, cutting the price in half.

The Yamaha Silent Brass™ lineup now includes the SB79 trumpet and cornet, the SB69 flugelhorn, the SB59 trombone, the SB39 french horn, the SB29 euphonium/baritone, and the SB19 tuba system.

Yamaha upgraded the system in 2011 to include an extra cable that could be used to connect an alternative music source, such as a CD or MP3 player, to the ST9 personal module. This changed the MPN by adding a letter C to the end, indicating the addition of the cable. So, an SB79 changed to an SB79C. 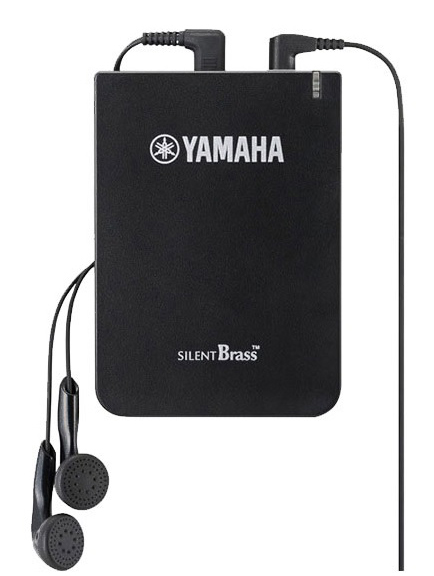 2013 introduced a major change in the Silent Brass™ system. Yamaha redesigned four of the six Silent Brass™ system mutes but discontinued making a mute for the piccolo trumpet. With an MPN of STX, this new 3rd-generation Yamaha Silent Brass system incorporates many improvements, including a smaller, lighter Pickup Mute™ and an easier-to-use Personal Studio™. The number structure changed for the mutes by adding the letter “X” to the end. So, the PM7 trumpet mute, is now PM7X.

Winning manydesign awards, Yamaha created this next line of mutes by focusing on a player's functionality. The trumpet, trombone, and French horn mutes will now fit in the bell of the horn, and you will still be able to close your case with it still in the instrument. (We suggest that you always leave the mute as loose as possible when storing it in the bell. ) it is perfect for inserting or withdrawing the mute while turning since it has a 7- and 9-pointed rounded-star design that the player can easily hold and turn. More details about this new design can be gound on Yamaha's website.

The Silent Brass™ lineup MPN has been updated once more with the following: SB7X is now the trumpet system, SB6X is the flugelhorn, SB5X is the silent brass trombone, and SB3X is the French horn. Many sellers added the “C” to these models because it included the extra cable like with the SB7XC model, but this was never an official MPN. Yamaha removed this extra cable when the second generation of Personal Studio was released, and the confusion faded over time. 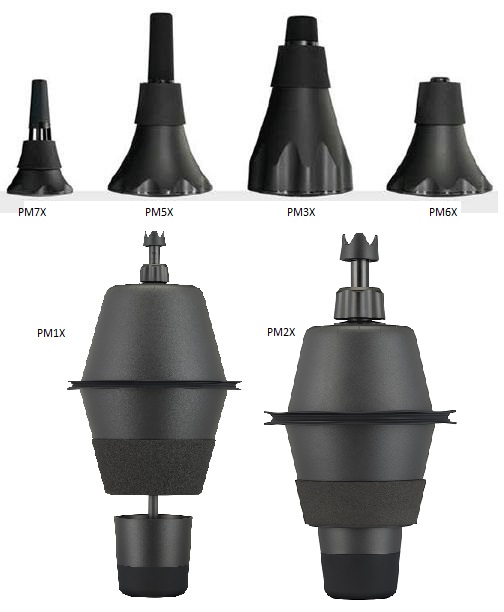 It would take Yamaha almost three more years to complet development of the new systems for the euphonium and tuba instruments. When this big release happened in 2016, they announced an upgrade to the STX Personal Studio™ which now has an MPN assigned to it as STX-2. The "2" represents the 2nd generation of the STX module. The 1st generation STX will not work on the euphonium or tuba mutes, but the STX-2 module will work with all the newest mutes.

The new STX-2 Personal Studio, working with the newest mutes, improved the sound you hear as you play your instrument. This innovative technology is what Yamaha calls "Brass Resonance Modeling. " It removes the "mute" sound by digitally processing the sound received by the microphone and sonically removing the mute characteristics. This sound is processed within the module to add an acoustic environment for added ambiance, making it sound as if you are playing completely without a mute. It makes it sound like you're playing in a large concert hall by simulating how sound returns to the ears with volume and reverb effects.

The following complete systems are now available with this latest lineup of mutes: SB7X-2 for the trumpet, SB6X-2 for the flugelhorn, SB5X-2 for the trombone, and SB3X-2 for the French horn. Yamaha did follow this same pattern when it created the MPNs for the two remaining systems. SB2X for the euphonium and SB1X for the tuba. Although these two models both use the most recent STX-2 modules, they are technically first-generation systems using second-generation modules, so they omitted the "-2". It is a little confusing. One other abbreviation that sellers make is by dropping the "-" before the number two, making it SB7X2, but this is not the official MPN for this product.

MrSilverTrumpet has been an authorized Yamaha dealer since 2003. We decided to team up with Yamaha not long after the second generation model was introduced because we believed that this new technology would completely alter how brass musicians perform.  With nearly 20 years of experience, we consider ourselves the premier experts in all things Silent Brass. We often get asked if XYZ mute will work with the ABC module. To help answer these questions, we have created this compatibility chart so you can see which modules will work with each mute.

You can practice invisibly in an empty performance space with the aid of unique Brass Resonance Modeling technology. With the help of the Pickup Mute, a pair of earbuds, and the Personal Studio, which has a clip for belt attachment, you may virtually play silently. We believe that both players and homes will enjoy the Yamaha Silent System. The player can practice quietly while everyone else works more quietly.

This system is brand new in a box!!